Information on our 2015-2020 Business Plan can be found below. For information on the independent challenge group for the period visit the Customer View Group page here.

On 2 December 2014, we submitted our final  business plan for 2015 – 2020 to Ofwat as part of the price review process, which takes place every five years.  We had previously submitted our draft pIan in December 2013 and following discussions with Ofwat during 2014 we submitted a revised plan in June 2014.

Ofwat then issued their draft determination in August  2014 a copy of which can be found on Ofwat`s website This resulted in us producing our Final Business Plan.

Ofwat issued their final determination in January 2015  which we have accepted. A copy of this can be found on Ofwat`s website.

In particular, our plan makes provision for:

The documents submitted to Ofwat during the business plan process are shown below:

Ensuring our research is effective

In order to ensure the effectiveness of our customer research, an independent group was established to oversee and challenge this aspect of our future planning. A detailed description of what this group did is shown in the Terms of reference.

Members of this group were industry regulators and representatives from the local community. A full list is shown below. The members of the group were all completely independent from Bournemouth Water. The group was called the Customer Engagement Planning Forum (CEPF) and they monitored  and challenged our engagement with customers to ensure that it was effective and meaningful and, at the end of the process they submitted a report to Ofwat.

In 2012 we began a planned and thorough process to establish the views of our customers. It is not practical to speak to every customer so we employed the services of an experienced market research company who conducted research with a representative sample of customers on our behalf.

The research program started in May 2012 with a series of 13 discussion groups, each comprising around 6 customers selected at random from business groups, vulnerable people, younger members of the community and householders. Each group was encouraged to talk about water in general and Bournemouth Water in particular. Apart from making a short audiovisual presentation, we had no involvement in this process, thereby ensuring that the contributors’ views were not influenced by us.
The findings from these discussion groups formed the basis of formal telephone research, commencing in July 2012, during which around 500 domestic and 150 business customers took part in a survey. The survey was independently designed by our market research company and our involvement was again kept to the minimum possible. In November 2012, we tested the findings with a group of 20 customers, 10 domestic and 10 business, who we invited to spend a day with us. This enabled us to explore in more depth the findings of the survey by listening to their opinions to ensure they mirrored our analysis of the findings.
This enabled us to carry out more specific research on what our customers’ priorities are for their water supply for the period 2015-2020. And then finally, to re-assure ourselves that we had correctly interpreted the views of our customers, we held a series of research events where customers were recruited from the street and shown details of our proposed plans. After having the chance to study and consider the proposals they were asked: “Is this plan acceptable to you?” and 79% of the 196 people asked said “Yes”.
In addition to the above program we also liaised with local schools to seek out the views of our “Future Customers”. 8 secondary schools took part and over 1000 questionnaires by students aged 16-18 were returned. The findings from this research will assist us in our long term planning.

The results and information obtained from our customers during the above program were submitted to Ofwat with our Draft Business Plan in December 2013.

The results from this final piece of research were a key component of our response to the draft determination in October 2014. 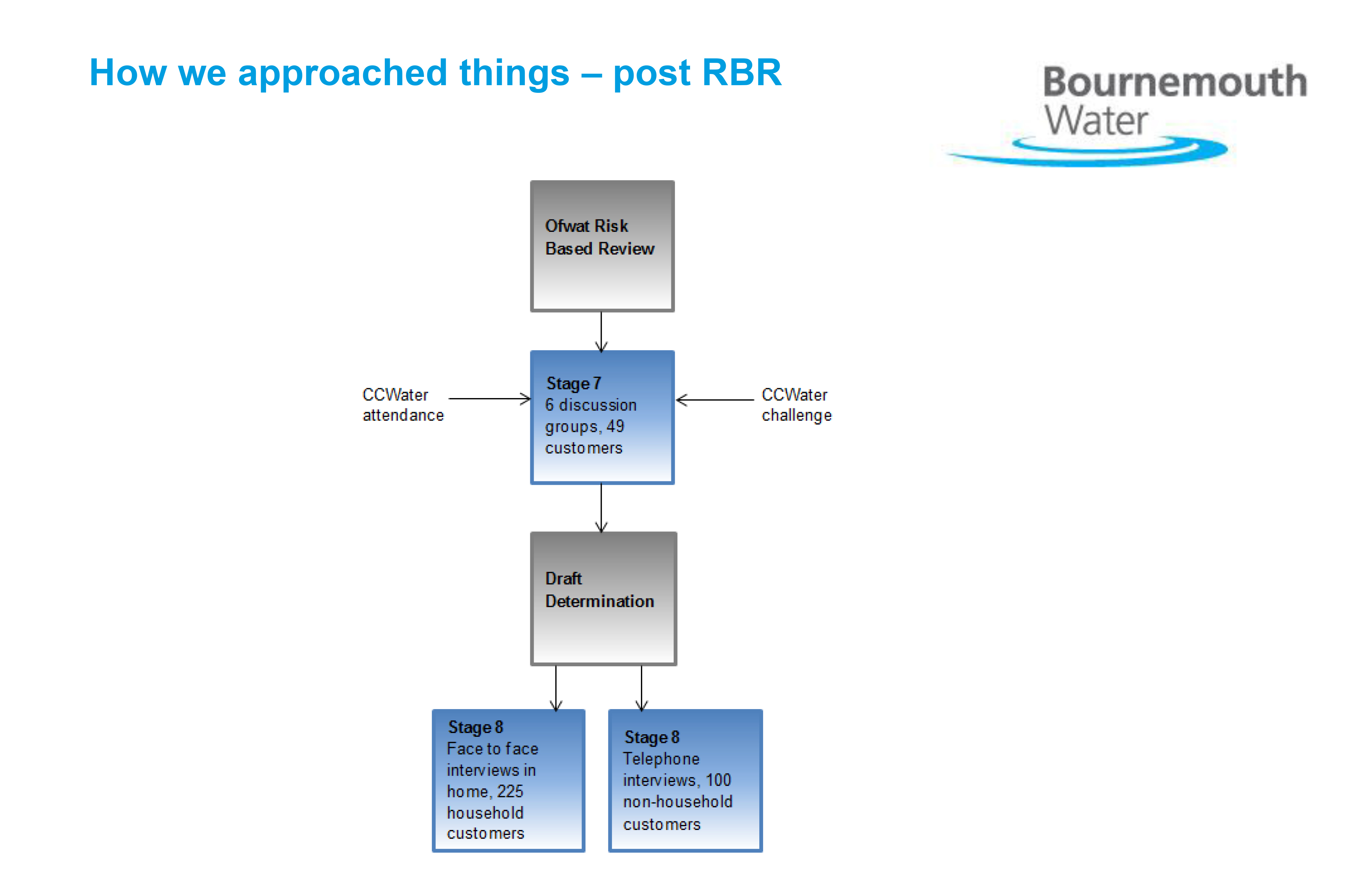 The Outcomes chosen were directly influenced by the research we undertook with our customers.

The Outcome Delivery Incentive paper explains our menu choice and how this has a bearing on the rewards or penalties we may receive depending on under or over performance towards our stated performance commitments.